The (Other) Top Trucks for Plowing 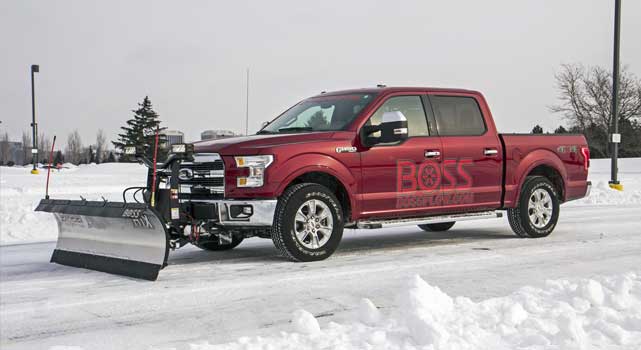 Whether you’re a contracted municipal worker, are in the private snow removal business, or you just want to be able to clear your property yourself when the frozen stuff strikes, you need a tough vehicle to be able to combat Winter’s fury. As such, light-duty pickup trucks are the perfect candidates for snow plow equipment fitting.

Trucks are as American as baseball and apple pie but in recent years, their mainstream popularity has grown to the point where they’ve overtaken the old trusty family sedan as the preferred people hauler. That’s because many of today’s new vehicle shoppers see the advantages of the added functionality of a pickup truck over an ordinary car. Because of their obviously larger size, trucks can haul more people and cargo than a regular car. Trucks are also built to endure tougher terrain and harsher conditions than the everyday average car, which is attractive for those who live in rural areas as well as urban and suburban areas who experience extreme weather conditions during the Winter season. According to Statista, light trucks have increased to 11.8 million units sold in 2018, the largest sales spike since 2010 when the 2008-2009 financial crisis caused a temporary stall in truck purchases. Ever since the rise of the American auto industry, automotive trends have come and gone. The business coupe, the muscle car, the personal luxury car, the station wagon. All have either fallen or have been reduced to niche segments but by the way things look now and how they appear to be going, the pickup truck is here to stay.

With so many trucks populating the market, one has to ask ‘Which make/model is the best of the best?’ The automakers spend billions of dollars annually in advertising campaigns, all eagerly attempting to convince their next prospective customer that their respective entry is the king of the hill and that the competition isn’t worth consideration. What makes this all the more confusing for the average American shopper is that unlike a family sedan, a compact economy car, or even a sports car, pickup trucks essentially follow the same basic formula: big horsepower, big torque, boxy utilitarian shape, and an emphasis on function-over-form in philosophy. Yes, the average buyer might be more interested in leather seats and touchscreen infotainment systems than suspension travel and front and rear axle ratios, but there’s still a sizable chunk of truck buyers who actually use these things for their intended work purposes.

As expected, the full-size offerings from Detroit’s “Big Three” take the top slots in Q3 truck sales for 2019. In a report by goodcarbadcar.net, the Ford F-Series sits atop all light-duty pickup truck sales in the #1 position, followed by the Ram Pickup in 2nd place, and the Chevrolet Silverado claiming the 3rd spot on the podium. Full-size pickups account for a large portion of fleet and business sales; the standard work truck is often the basis for industrial and skilled trade company vehicles. Full-size pickup trucks have always historically been low-cost, high-profit products for automakers, which means that they offer greater wiggle room in pricing than their smaller midsize counterparts and even regular passenger cars. They’re a popular buy for both working individuals as well as growing families.

But outside the “Big Three’s” bread-and-butter truck offerings, you might be surprised to find out which other truck models are the big sellers of today. Let’s take a look at the next 5 most popular trucks in 2019 and maybe you can choose if either of them might make for a suitable candidate for your next plow vehicle. 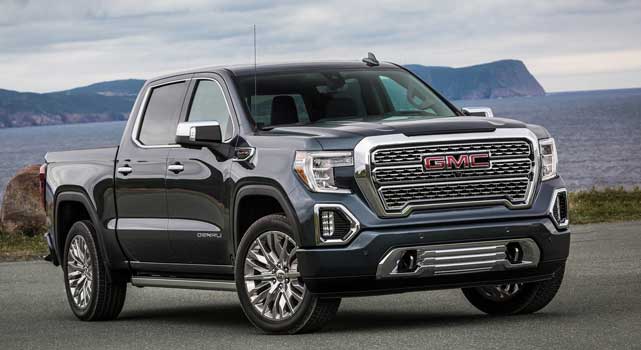 The GMC Sierra is the corporate cousin of the Chevrolet Silverado full-size pickup truck. Because of this, people often are quick to dismiss the Sierra and the Silverado as mere copies of one another. Both ride on the same GMT K2XX truck platform; both utilize the same selections of base and uplevel powertrain and drivetrain options; both trucks can be configured in regular cab, double cab, and crew cab; and both feature similar physical designs as well as size dimensions and curb weights. However, the differences between the two can be found beyond the superficial. GM positions the GMC Sierra at a slightly higher price point than the Chevrolet Silverado as the Sierra is intended to be a slightly more upmarket and refined product than the Silverado. The Sierra’s interior, while sharing the basic form and function as the Silverado’s, is assembled with higher-quality materials for the dual purpose of presentation as well as enhanced occupant isolation for a quieter and more comfortable experience. In top-tier Denal trim, the Sierra still includes standard features that are extra cost options on the range-topping Chevrolet truck including the Corvette-born Magnetic Ride Control or options that aren’t even available at all on the Chevrolet, such as the GMC-only CarbonPro carbon fiber bed and Adaptive Ride Control. In essence, the Sierra would be perfect for the working individual who also enjoys the creature comforts of a luxury vehicle during off-work hours. 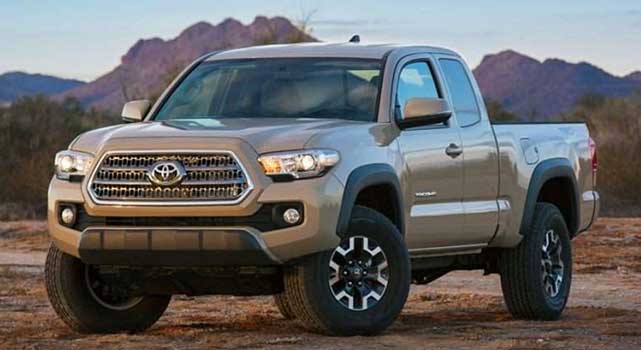 Toyota’s trusty midsize pickup truck is popular with those who need a good, solid truck for work as well as truck performance and off-road racing enthusiasts; so popular in that it (and the Nissan Frontier) practically defined the midsize truck market in the late 1990s and 2000s. With such a wide variety of Tacoma enthusiasts, Toyota has addressed each type of buyer in the market with the base SR and SR5 trims while performance-oriented customers are presented with the TRD Sport, TRD Off-Road, and TRD Pro packages. TRD Sport is targeted for street performance with larger 17” wheels, standard 3.5 litre V6 engine, and automatic limited slip differential. TRD Sport ups the ante with a tuned off-road suspension supplemented by Bilstein shocks, electronic locking rear differential, and an available active control system (when paired with 4X4 and manual transmission). The ultimate all-terrain Tacoma is the TRD Pro, which further enhances the TRD Off-Road package’s already-impressive lineup of features into dedicated performance territory. TRD Pro includes a tuned TRD cat back exhaust, high-mount intake snorkel, TRD front coil and rear leaf springs, and the TRD off-road suspension with FOX racing shocks. The Tacoma is available in either Access (standard) or Double (crew) Cab configurations. 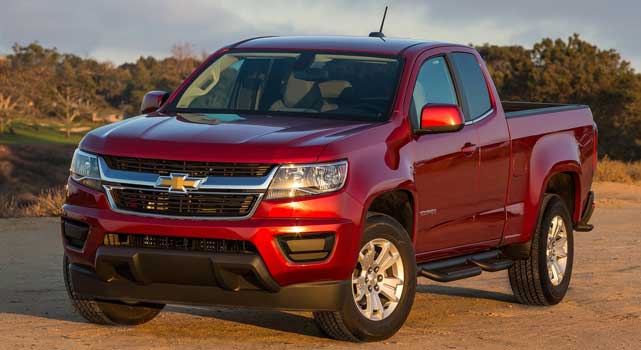 The original Chevrolet Colorado and its GMC relative, the GMC Canyon, was introduced in 2004 as the successor to the famous S-series midsize trucks, the Chevrolet S-10 and GMC S-15/Sonoma. It was a decent-selling truck for the time, but build quality and long-term reliability were not among its strengths. This all changed when the 2nd generation Chevrolet Colorado/GMC Canyon (which was already being produced and sold outside of the United States since 2012) finally arrived in dealer showrooms in 2014. Featuring an all-new chassis, updated powertrain and drivetrain options, and modern styling and interior treatments, GM put the automotive world on notice that they were ready to reclaim the midsize truck market from the Japanese as they had in the early 1990s. Historically, in GM’s midsize truck line, the Chevrolet versions had always outsold the GMC counterparts and the current Colorado continues this tradition by outselling the GMC Canyon. This is reflected by the 5 tier configurations that are available on the Colorado versus the Canyon’s 3. The Colorado lineup has something for everyone, from the no-nonsense Base and WT (Work Truck) trim levels, the midlevel LT which represents the majority of Colorado trucks sold, the premium Z71, up to the elite ZR2 off-road performance pickup. 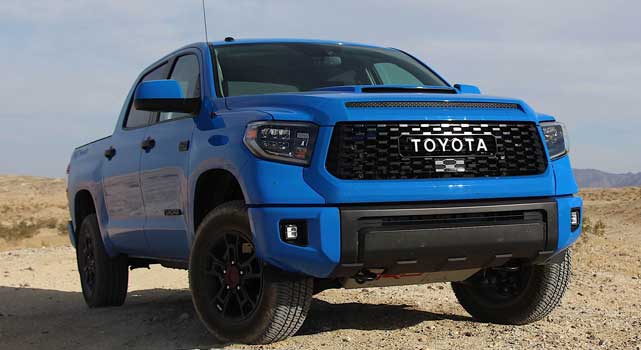 Toyota may dominate the regular passenger car market with the Corolla and Camry but one place where the Japanese automaker struggles to compete against the Americans is in full-size trucks. The Tundra is Toyota’s answer to the Ford F-Series, Chevrolet Silverado, and Ram Pickup and while it’s evenly-matched against its American-born competitors in terms of performance, utility, and pricing, the Japanese-owned (albeit, American-engineered and built) Toyota Tundra has typically always lagged behind the Detroit Three in sales. That being said, it would be a mistake to immediately discredit the Toyota Tundra as an unworthy pretender in the full-size truck market. Despite this current generation being first introduced new for the 2007 model year, the Toyota Tundra is a seriously tough truck that carries Toyota’s reputation for dead-solid reliability and their TRD off-road racing pedigree. It is the only entry in this truck lineup that predates the 2010s yet, it has managed to maintain steady sales due to Toyota’s annual updates to keep it competitive for new buyers without alienating their most loyal of truck customers. The Tundra, believe it or not, has a larger bed in both its smallest and largest forms versus the best-selling Ford F-150 (Toyota’s short box is 55 cubic feet to the Ford’s 53 and in long box form, Toyota offers 81 cubic feet compared to the Ford’s 77 cubic feet). This is crucial for owners who actually use their trucks to haul cargo instead of air. The TRD Pro package returns to the Tundra for the 2019 model year. 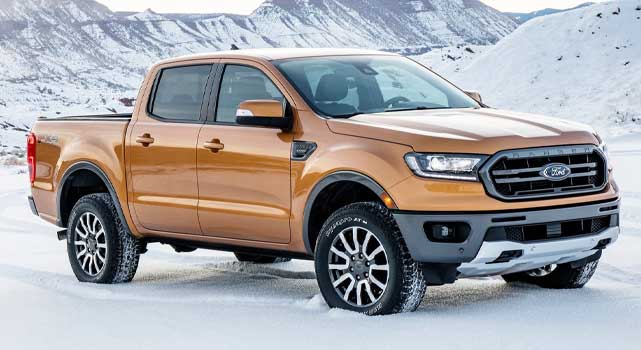 The arrival of the 2014 Chevrolet Colorado led to what was, perhaps, the worst-kept secret in the automotive press at the time: that Ford was planning to reintroduce their iconic Ranger midsize pickup back into the United States and Canadian market. However, it wouldn’t be until the Autumn of 2018 when the latest, fourth generation Ford Ranger would go on sale to the public as a 2019 model. Much like its GM rival, the Ranger had continued to exist and thrive in other parts of the world whereas the midsize truck market in the United States was virtually reduced into irrelevance during the late 2000s. As full-size trucks gained prominence in the years following the 2008-2009 recession, the public demand for midsize trucks returned. As the F-Series is the best-selling full-size light duty truck, Ford believed that they can very well conquer and dominate the midsize truck market with a brand new, reimagined Ford Ranger. The new Ranger is based off of the T6 truck platform which was designed and engineered in Australia where it had always enjoyed continued success. It made perfect sense that Ford Australia be tasked with the creation of this newest iteration. The new-for-2019 Ford Ranger is available in two different 4-door versions, the SuperCab and larger SuperCrew, and 3 different trim packages with 3 separate sublevels to supplement each trim. Although the Ranger’s list of available options can allow it to remain as a basic workhorse or an entry-level luxury truck, it is only available with one engine and transmission combination: the 2.3 litre Ford EcoBoost turbocharged 4-cylinder and a 10-speed automatic transmission. The Ranger's EcoBoost 2.3 turbo I4 engine offers the most standard horsepower (270) in the midsize pickup truck class.

Unique Feature: The Ford 10R80 10-speed automatic transmission was designed and engineered with cooperation from GM. This transmission can be found in Ford and GM's respective full-size pickup truck and SUV lineups, as well as the V8-powered versions of the Ford Mustang (2018-) and Chevrolet Camaro (2019-).
Starting MSRP (Ranger Lariat): $32,390

The modern truck market is so competitive today, it really comes down to what you're willing to spend. Brand loyalty, while fiercely strong in some customer families, doesn't hold the same value as it did 30 or 40 years ago as vehicle reliability has evened out and as the auto industry shifts from nationalistic to a global market. The trucks featured in this piece are the current top-selling models of 2019. Test drive them all, if you wish, but when it comes time to equip your new pickup with the proper plow gear, shop Discount Starter & Alternator for plow accessories such as snow plow augers, rubber cutting edges, snow plow trip springs, and plow lift cylinders, as well as snow plow pumps and hydraulic motors.